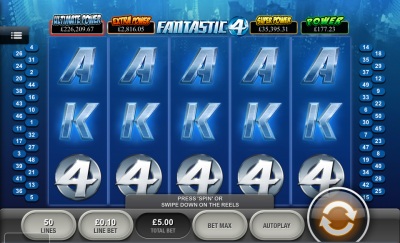 The Fantastic Four mobile slot is one in a series from Marvel who have teamed up with Playtech to make some of the most eye-catching mobile slots going. The slot allows you to play with all four characters from the movie (Mr Fantastic, The Invisible Woman, Human Torch and The Thing) whilst pretty much battling it out to save the world.

One of the most unique things about the slot is that it’s a 5 reel, 50 payline, which has actually recently been bumped from just 20 paylines – although you can still play with 20. The slot, as with most Marvel mobile slots, includes a ton of feature and bonus rounds to add to its longevity.

The idea is to work with any of the four characters from the movie. Similarly to the movie, each character has a variation of powers and skills, which in mobile slots terms, translates as free spins. So whilst some may offer more than others, they may not always turn out to be the most profitable as multipliers often get thrown into the mix for good measure.

First up we just want to mention about the progressive jackpot linked with the Fantastic Four mobile slot. Those of you that are familiar with other Marvel slots may realise that they actually all form part of one big progressive jackpot. Those of you who didn’t, now do! The game is pretty much totally random and as far as we are aware, has absolutely no bearing on the amount you are wagering. If we did have to hazard a guess though, we would say that it’s probably more likely if you are playing higher limits. Jackpots can range from the low hundreds of thousands, into the millions.

The free spins and feature section is pretty much what the Fantastic Four mobile slot is all about. First up, you need to collect your three or more Silver Surfer scatter symbols, before being taken into the free spins section with a guaranteed 12 spins. At this point we just want to make it aware that it’s not actually all that simple to get into the free spins section. This slot, like most from Marvel, is one that pays out less frequently than most, but the pay offs are generally much higher. Back to the free spins…

With each free spins you will be assigned one of the four characters who all offer something a little different. Mr Fantastic will provide 4 additional spins and will become a Wild for those four spins. The Invisible Woman again gives you four spins but every time her symbol appears you will receive a multiplier of up to 3x for your winnings. The Human Torch gets you four extra spins but substitutes the other characters for his torch which could potentially yield a multiplier of up to 1000x your bet. Finally, The Thing gives you just three spins, but he will hold sticky’s when playing to again allow for potentially massive paydays.