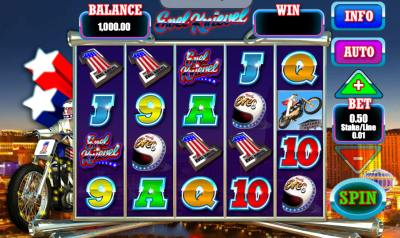 NextGen Gaming taps the edge-of-your seat excitement of the world’s greatest daredevil for its Evel Knievel Slots game. The action reaches a crescendo as the reels spin mimicking the anticipation fans remember waiting while Evel gunned the engine of his motorcycle on the take-off ramp before one of his death-defying motorcycle jumps.

The drama plays out on the mobile game with a five-reel slot featuring twenty paylines. When the app reveals the stunt hero himself on his motorcycle you could be on your way to the titanic 10,000-coin jackpot at the end of a wild ride of a bonus round.

The Evel Knievel mobile slots game celebrates the exploits of stunt riding’s most memorable showman. The app dredges up all the images that defined the daredevil’s career: the big bikes, the crash helmet that helped him survive 433 broken bones (he’s in the Guinness Book of World Records for that), the ring of fire he jumped through to many world records, and the Skycycle X-2 rocket bike he used in an unsuccessful attempt to jump the Snake River canyon in Idaho. There is even the cane the great stunt man required to move around when off his bike after so many unplanned landings. The only thing Evel Knievel ever loved more than entertaining was his country so of course you also get the one-of-a-kind white leather jump suit emblazoned with the stars and stripes from the American flag..

Just as Evel Knievel would have wanted it you max out your risk on 20 pay lines, each with a range of between one and 20 credits. More timid souls can gamble on as little as a single payline. The pot of riches at the end of your jump is a jackpot of 10,000 coins should the wild symbol – Evel on a background of the American stars and stripes – line up on all five reels. That wild symbol takes the place of all others save for the scatter and bonus. If more than one shows up on your mobile screen prizes are doubled. Symbols pay left to right at the end of a spin. Meanwhile Evel does wheelies across the screen to a pulsating beat to keep the action moving in every direction.

The dashing profile of Evel is the scatter symbol and two pay anywhere on the five reels. Three scatters trigger a 15-free spin session and kicks your winnings up threefold. More free spins can be added to your total during free spin bonus time. During the free spins there are increased Skycylces on the reels.

If the motorcycle-jumping Evel symbol appears on reels 2 and 4 only you are headed for the Daredevil Bonus and the great man himself jumps onto the screen to let you know you are about to Win Big. While Evel jumps over container trucks in the background you are presented with jump buttons on four screens. If the world’s foremost daredevil completes all four jumps you win 10,000 coins for every one you wagered. While the tension builds in the Daredevil Bonus the remaining spins are locked and do not count down. The Daredevil Bonus ends when Evel returns to the ground on Reel 3 and spins return to normal.

There has never been anyone who took more risks and played life bigger than Evel Knievel and NextGen Gaming delivers much of the same to your mobile device with this fast-paced slots experience.