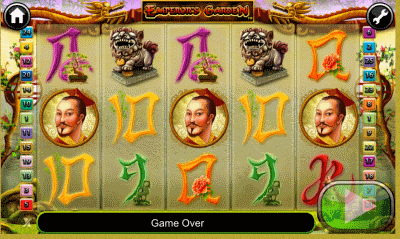 Emperor’s Garden from NextGen Gaming is an atmospheric mobile slots game that transports your gambling psyche to a calming place where wins are barely celebrated and losses are simply part of the cosmic plan. Your reward is simply to spend time in such a beautiful place.

Emperor’s Garden is a five-reel gentle spinner that dispenses coins on 25 paylines. There is no progressive jackpot but you can leave the garden with 250,000 coins by playing the maximum 50-coin stake.

This Emperor’s Garden is a stylized place of relaxation created with trickling waterfalls, twisted bonsai trees, lily ponds and wooden pagodas. Stone Chinese lions stand guard to keep any bad thoughts from entering this paradise of the mind. Calmness is the watchword of this peaceful sanctuary. Soft music wafts across the landscape and tickles the blooms of the lotus flowers. The minor playing card symbols are so stylized as to be nearly unrecognisable. Animated dragonflies and koi fish bring graceful life to the garden.

The Waterfall Garden is the Wild symbol for the game and substitutes for all the regular symbols except for the Scatter, which is played by the Koi Carp. When the Waterfall Garden appears as part of a winning line on Reel 2, 3 or 4 it expands to take over the entire reel. It may be unexpectedly bold for the mood established by Emperor’s Garden but it is your pathway to the largest riches. Not that the game will make a big splash about it when it happens.

When three or more Koi Carp school together Emperor’s Garden grows an additional 10 spins. During bonus play every Waterfall Garden symbol produces triple wins. These money-generating spins can be re-triggered.

There is a Zen-like Emperor in charge of this garden. If he comes into the sylvan landscape five times on a payline it multiplies your stake 5000X. The Imperial Stone Lion increases your bank by 1000X your wager if five line up on a payline.

Before you leave the Emperor’s Garden you are given a chance to increase your winnings with a Gamble Feature. The turn of a card can double any win by picking red or black or quadruple it by guessing the proper suit. If you lose just drop the coins into the lily pond on your way out.