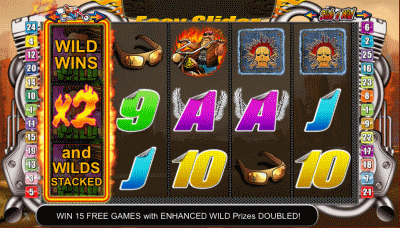 How many 50-year old movies do you know that simply saying the title immediately thrusts you into its world – even if you have never watched it? Easy Rider is one. So at NextGen Gaming if the gimmick of your new mobile slots game is a sliding mechanism and it is easy to figure out…you’ve got Easy Slider and motorcycles tearing up the open road.

This is a five-reel slots game that pays out on from one to 25 lines. There is no progressive jackpot but the top in-game return is 25,000 coins on a 500X multiplier of the maximum stake of 50 coins.

The slider may be easy but these bikers are anything but. From the moment you drop your virtual coin into the slot there is lots of gunning of engines and bellowing exhaust as the metal roars to life. There is heavy metal on the soundtrack as well with hard-driving guitar riffs. This world is populated by flame-haired biker babes, big-armed biker dudes, menacing tattoos and overheated rubber everywhere. Even the minor card symbols in Easy Slider are ablaze. The game itself is mounted on a rumbling cycle and pointed down the highway.

The trademark feature of the game’s title is the onscreen Slider that allows you to decide how much you want to open the throttle on this road trip. It acts as a Wild Enhancer and you can position the little hog at the top of the reels over any individual reel before play begins. Choosing Reel One, for example will produce a 2X multiplier when the Stacked Biker Babes (she’s the Wild) line up on the enhanced reel. Choose to go full throttle and move the slider all the way to the right to Reel Five and the multiplier fires to 6X although the Biker Babes will be correspondingly more difficult to find on the road.

The Burning Rubber is the Scatter and it doles out free games when three or more burn up the road at the same time. The award is 15 spins regardless of how many Burning Rubbers scorched the macadam but they can be re-triggered during bonus play. And those Enhanced Wilds will double in value during free play so the high risk Reel Five is now paying 12X.

Five Biker Babes on the same payline will award the 500X prize; five Burning Rubbers a pleasing 100X. And every time Biker Babe has a big prize to award she pops off her reel and gives you an animated fishtail on her machine. Those are the rules of the road.