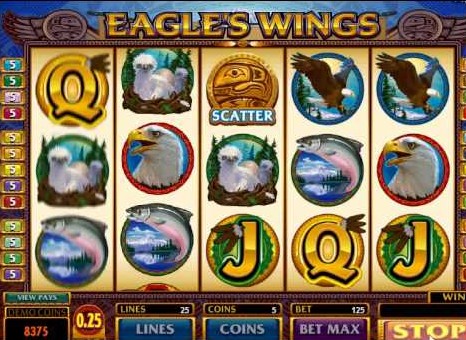 If you were all set to embark on a treacherous World War II mission with fighter planes and impossibly brave feats of derring-do take off your helmet and settle down, this mobile slots game from Microgaming is really all about the majestic avian predators.

Eagles Wings, released on mobile in 2014, is a five-reel slots game with 25 win lines. You can lift off the ground with just 0.01 coins and soar up to 1.25 coins wagered per line for a Max Bet of 31.25 coins. There is no progressive jackpot to be had in these woods but there are free spins and multipliers to be hunted. There is an Auto Play option that allows five or ten plays in a row while you keep your eagle eyes peeled for prizes.

Eagles have been used as national symbols in so many countries from Egypt to Austria to Mexico to Germany to Russia that it is no wonder Benjamin Franklin favoured the turkey as the symbol of the new United States. It lost out to the bald eagle. This nature-themed slot takes you to Rocky Mountain vistas of the North American west where you see leaping salmon, crystalline mountain lakes and the bald eagles that are rulers of this magical landscape. Even the minor playing cards appear as though they are ready to be carried into the thermals by Eagles Wings.

The Eagles Wings Logo is the Wild and an Eagle Token is the Scatter. The Eagles Wing Logo is the major domo of the pay table as it will pay out 1000X your initial wager for five across an active payline. It will substitute for all other symbols except the Eagle Token and when it works to make a winning combination that prize is doubled. When a convocation of bald eagles fly onto the screen they can stack on the reels that will increase chances for a winning combination.

The Eagle Token will trigger the Lucky Eagle Bonus when it appears at least three times anywhere on the reels. Depending on how many activate that bonus you get to pick Tokens that will reveal the number of Free Spins you have earned, up to a maximum of 60. All wins during the bonus spins will be tripled from the amount wagered in the triggering game. The Lucky Eagle Bonus can be re-triggered at the original number of free spins awarded. And you go where eagles dare.