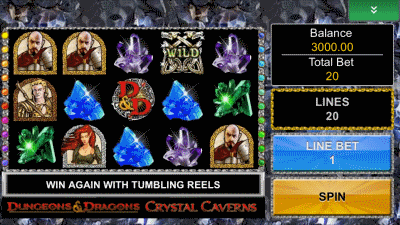 Dungeons and Dragons started the wave of modern role-playing games in the 1970s and is still the best-known and best-selling fantasy role-playing game. It is fertile ground for adaptation into a slots game and IGT has crafted this quest to the Crystal Caverns as a mobile slots adventure.

This is a five-reel, 20-payline game. There is no progressive jackpot to search for in Dungeons and Dragons: Crystal Caverns but you can score 25,000 credits on a single spin.

You do not have to be one of the 20 million Dungeons and Dragons players who know what an Elf Princess is or can identify characters with names like Tordek and Bodock to enjoy a turn at Crystal Caverns. You can just revel in the pretty blue and green and purple crystals spinning around if need be. Others may enjoy the battles with monsters, the struggles for treasure, and the fantasy of conquest. There are certainly plenty of threatening grunts and watch-your-step music emanating from the Crystal Caverns where Trolls, Ogres and Skeletons reside along with unearthly jewels.

IGT developed a winner with its Tumbling Reels and they are on full display in Crystal Caverns. After a winning combination is unearthed the scoring symbols dissolve and new symbols tumble down from the cavern roof to replace them. This cascade of what are essentially free spins continues until no more winning pay lines are created.

Three of the Bonus symbols trigger what is known as the Tumbling Treasures Bonus with Super Scatter. You start with a modest six free spins and a 1X multiplier. But if that is all you leave Crystal Caverns with that was one failed mission. The reels are immediately enriched and three, four or five Bonus symbols anywhere on the reels unleash hordes of additional free spins. You can accumulate as many as 300 free spins before the game bleeds no more freebies.

While the free spins are playing out all Monster scatter symbols are paying an extra award as well. You only need to gather three or more of the same symbol anywhere in the cave to score these extra rewards. When you make it out of Crystal Caverns and start counting your haul you will realize this is no fantasy.