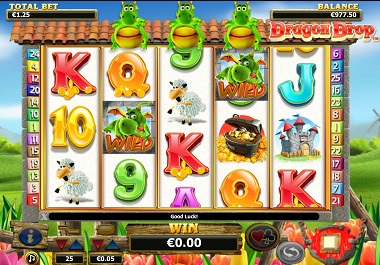 You can drop the scary at the door when you pick up this Dragon Drop mobile slots game from the Australian software developer, Next Gen Gaming. These dragons are breathing cute not fire in this 2014 release.

Dragon Drop is a five-reel slots game that delivers wins across 25 paylines. The adventure will begin with just 0.01 coins but you can also spend up to £2.00 per line for a maximum wager of £50.00 on the ageless battle against dragons, even the soft and fuzzy kind. There is no progressive jackpot in play but the top in-game jackpot can pay out many hundreds of times your opening wager. There is an Auto Spin option.

Apparently this dragon is menacing a humble farm somewhere in the Far East. So we get innocent sheep and eggs and a farmer who is going to war against the fire-spewing dragon armed with only a pitchfork and his wits. There is also a treasure chest and a castle involved in the story somehow. Some of the minor playing cards have been given golden eggs, others have not.

The Dragon is the Wild in his game and he makes his presence known only on Reels 2, 3 and 4, where he hangs out on top of the reels. From time to time he will drop down onto the reels to participate in a little symbol substitution. If his fire-breathing self-works to weld a winning combination that prize will be doubled.

But apparently this Dragon is not interested in death and destruction, he is only looking for a place to raise a family. His Eggs are the Scatter and when three or more are deposited anywhere on the reels a set of eight Free Spins is activated which are all incubated with a 2X multiplier.

If the Dragon decides those Eggs need tending to and drops in on these bonus games Dragon Drop starts to come to life. First off, the multiplier has multiplied itself to 4X the awards. Plus, like any good parent this Dragon is looking to stick around for the child-raising and so will remain Wild for whatever is left of the game, producing the big wins if all three dragons get in on the parenting act. You will be looking forward to the next generation as well.