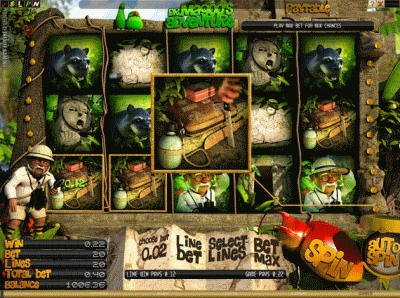 Dr. Magoo is another of the breed of archaeologists who seem more interested in ancient treasure than old bones. But in Sheriff Gaming’s 3D’s cinematic rendering think Colonel Blimp more than Indiana Jones.

Dr. Magoo’s Adventure is a five-reel mobile slots games with 20 paylines. There is no progressive jackpot but there is a top in-game prize of 5000 times your stake. Autoplay is available so you can concentrate on the treasure hunt.

We see Dr. Magoo solo flying his tri-prop seaplane to an unexplored South American island where no human has set foot before. He lands on the beach and immediately picks up a crab for a porter. We are warned to beware of the dangers that lie ahead in the quest for mysterious treasure but Magoo seems to be able to nimbly dodge the black panthers and scary idols. Despite the ever-present jungle cries in the background his greatest danger comes instead from pooping parrots as he is busy with his magnifying glass.

Dr. Magoo is naturally the biggest symbol in the jungle who returns that 5,000X award when five show up from left to right on a payline. The next highest award is the Binoculars which returns only 250X when it fills the reels so you can see it pays to keep a lookout for the intrepid explorer.

The Parrots are the Wild and when they show up on the centre reel the entire reel expands to become wild although you will be more pleased to witness this happenstance than Magoo. This is the most common bonus you are likely to uncover in this adventure.

The biggest find will be when three Tomb Doors appear anywhere on the reels. You may also find four or five. Three Tomb Doors deliver 10 free spins, four give you 15 and five the maximum of 25 free games. You warily enter the tomb for the bonus round with all new symbols. These are more valuable than the basic game out in the jungles and if Magoo joins you inside the tomb there are more spins in the offing. When you leave the tomb you will know why Dr. Magoo always wanted to come to this remote jungle.