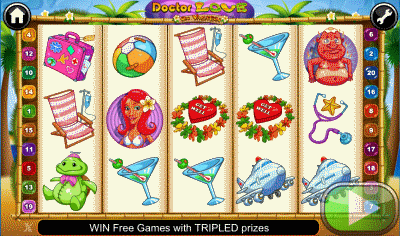 NextGen Gaming introduced us to Doctor Love back in his hospital and now for its sequel the good doctor has earned some rest and relaxation in a tropical paradise where the only medicine he plans on dispensing comes wrapped in red hearts.

Like back in the hospital Doctor Love on Vacation plays out across five reels with 20 paylines. Play can commence with just 0.01 coins and as many as 2.00 coins can be wagered on each line. There is nothing more tiresome than chasing progressive jackpots in this land of paradise. To kick back and relax even further the Doctor has allowed Max Bet and Autoplay buttons to carry the action.

Away from the hospital and deposited on a tropical island Doctor Love seems more in his element. It looks as if the toughest case he will have to deal with on holiday is a bad case of sunburn but he has brought along his stethoscope, his thermometer to mix his mai tais and his beach chair with attached catheter bag anyway. His flame-tressed nurse has traded in her sanitary cap for flowers in her hair and her starched white hospital garb for a white bikini. Love himself has swapped in ambulances for jet planes and crutches for swizzle sticks on this holiday.

Doctor Love is always the Wild in his adventures and he is here as well. He stands in for all the symbols except the scattered Surfboard and when he gets involved in a win he doubles it. If he shows up five times on a payline he coughs up the cost of the holiday with 5,000 coins. The redheaded Nurse is the next most valuable symbol, paying out 1,000 coins your stake should she appear five times.

When the waves roll in and three Surfboard Scatters appear 12 Free Games are awarded, four Surfboards produce 16 spins and five crash on the beach with 20 free spins. All prizes in the bonus round are tripled and if Doctor Love is in on the win the coins are multiplied 6X.

But that’s all the Doctor planned for this holiday. There are no other features besides the surfing. That’s his only prescription for fun.