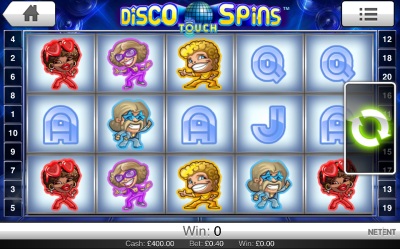 It’s back to the 70’s with Disco Spins slot by NetEnt. This groovy little number is about as colourful and as funky as you’re going to the get in the mobile slots market. The game is based around a disco dancing posy who are jiving their way to towards that big jackpot.

The game includes 5 reels, 3 rows and 20 paylines along with its standout feature of including not one, but two free spin modes to choose from.

So this slot has a mean 70’s vibe going on and it’s the inclusion of characters that look a bit like Disco Stu from The Simpsons and his crazy friends Disco Diva and Disco Donald. OK, we made the names up, but there are a host of cool characters on the slot.

The colours, the music, the graphics and the features all make this feel like a real trip back to funky town. It’s been designed to be fun and it does it exactly that, but don’t get caught out like we did and end up not actually playing the game but just listening to the amazing soundtrack instead. Is that lame?

Unlike a lot of the NetEnt video slots for mobile, this one doesn’t include a huge array of features in all honesty. But, it does include a choice of free spin games, of which we haven’t actually seen within the market of NetEnt games. The choice is between Free Spins and Disco Spins. The Free Spins include 15 regular spins with a 3x multiplier on all bet lines, whereas the Disco Spins include 10 free spins with only the disco dancers on the reels.

In all honesty, the Free Spins section, from what we have seen, looks to be the better payout, but if you are chasing the jackpot amount of 30,000 coins, then you will need to be on the disco Spins game to do so. That being said, the Free Spins section does give you the opportunity to claim more spins, so this could potentially increase the time in which you are a part of the game and then win more.

The wild symbols are the biggest part of the game and these allow you to win the most money. They will complete a host of bet lines for you and also light up their disco floors for when the dancer on the wild symbol hits the right steps, then this could increase your win amount or multiplier.

Overall the slot is based around having fun, not taking it too seriously and also being able to consistently hit winning streaks. The funky 70’s vibe is defiantly something we dig, but you’d probably call in the longevity of the game as a result as there’s only so much disco one person can take!