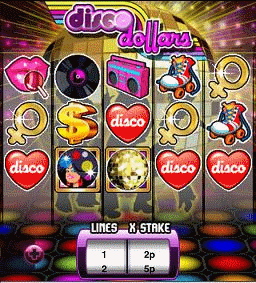 Disco is the music world’s ultimate dirty pleasure. Everyone claimed to have hated it back in the 1970s but behind closed doors everyone must also have been cranking up the stereo and breaking out the bellbottoms because it refuses to die. Certainly Disco Dollars from Probability will get mobile slots players dancing.

Disco Dollars is a five-reel slot with 50 paylines. You can jump onto the dance floor with as little aas 0.02 units and can wager as much as 0.50 units on any payline. Just like the music the jackpots are not progressive. Max Bet and Autoplay options keep the music pounding non-stop.

It is the 1970s again. Gloria Gaynor is atop the charts. Purple and pink are the colours of the day. John Travolta and the Bee Gees are Stayin’ Alive. The slots play takes place on a classic disco dance floor lit from below and there are roller skates, outrageous hairdos, boom boxes and platform shoes all lasting from the reels to keep. Those reels are spinning in a glitter ball and our trio for dancers are shaking it to some of the catchiest music ever etched into vinyl.

The Disco Diva is the hottest of the hot in Disco Dollars. She pays when she just shows up twice on a winning payline from left to right (15X). If she covers an entire payline you are leaving this disco with 1000X your line stake. The Disco Diva is also Wild and she will team up with any other symbol on the dance floor to make winning combinations.

The Glitter Ball is the Scatter and it will pay 300X your stake for a complete win lien of five. But three, four or five also trigger the Free Spins bonus round. You get three, six or nine games on the house, respectively. No multipliers are attached for these free dances but they can re-trigger and go on an on into the night. I will survive!