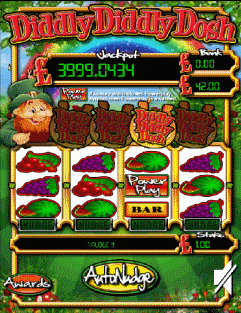 When it came to developing a follow-up to its popular Lucky Charm game Alchemy Bet did not rely on the luck of the Irish. Instead the developers sought the advice of Pocket Fruity players to build in the features that mattered most to mobile slots fans. The result is the nonsense-named Diddly Diddly Dosh.

This is a four-reel slots game with just the single payline. There are mini pots of gold in bonus rounds and a progressive jackpot worth dancing a jig over.

The phrase “luck of the Irish” has nothing to do with Ireland but actually originated in the States, in the gold and silver mines of the American West. Many of the most successful prospectors and mine operators were Irish immigrants and their good fortune was not attributed to any exertion of hard wok or application of brains but often derided in the frontier towns as just the “luck of the Irish.” Nonetheless, those origins have been shrouded in an Irish Sea fog and these days Irish luck is most often associated with happy leprechauns and pots of gold. And that is what we get here in Diddly Diddly Dosh, a classic fruit machine with the familiar bars and 7s. The jolly Irish soundtrack will certainly put you in a spinning mood. if you don’t find the sounds absolutely hilarious you can press the mute button.

Wins come when three or four symbols mass along the win line from left to right, as expected. The Diddly Diddly Dosh symbol acts as a Scatter and when three or four show up anywhere on the reels it triggers a bonus round where rewards come in the guise of mega bonuses. You spin and the leprechaun piles up gold coins in pots until it is time to collect.

When the Power Play symbol appears it locks up a win with a super streak option that keeps spinning until your bank is sufficiently enriched. Four Jackpot symbols on the win line score the progressive jackpot; even three bring back a return of 250X your stake. That’s almost as good as lucky miners did back in gold rush days.