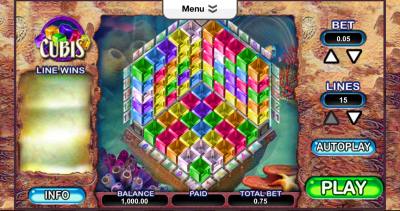 Cubis is a little different from your standard slot game, in fact, it’s not really much like a slot at all. It’s a game that reminds us a lot of something like Tetris or even Bejeweled, in that any winning blocks are removed for the opportunity to bring in new blocks; hence making new winnable paylines.

The game doesn’t include your standard reels and paylines, in fact it looks more like a standalone casino game and to be honest, it’s a pretty unique design. You can claim a rather generous bonus from the game though of 10,000 coins, but this will depend on how much you are wagering. You can bet anywhere between 0.15 coins and 300 coins a spin, so its defiantly one that’s going to appeal to a wide range of budgets.

The theme is a lot like the old school games that were just coming out to showcase the use of 3D graphics. It looks great to be honest and whilst at first might look a little bit confusing, after a few spins you sharpish get to know what’s going on. The cubes are bright and colourful and it includes a bit of an underwater theme, although this doesn’t really have much bearing on the game apart from a few graphics in the background.

For a game that’s pretty basic, it does actually include quite a few features. The main three are the line bomb, square bomb and nuclear bomb. The line bomb is the most common and this fires off a fire ball that randomly takes out a number of cubes. What’s great about this is the cubes re all replaced giving you a new stack of boxes of which can offer up new paylines.

The square bomb works much the same, except this time it takes out 25 boxes on one side of the box. Note that the box game includes three sides to it. Any new boxes that accumulate into winning combinations will be apparent and will stop when no more combinations can be made.

The nuclear bomb is the highlight of the game and this replaces all of the 75 boxes on the screen. Again, any new winning combinations will be paid out until no more can be made.