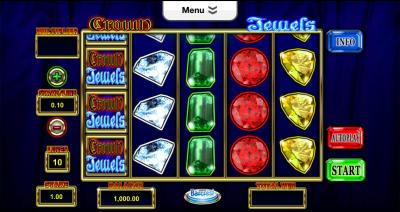 No, not those crown jewels! The Crown Jewels you get from this game are just as valuable though, although financially speaking. The game includes a number of high profile, precious stones and it’s this affiliation with money that runs throughout this mobile slot.

The game includes the 5 reel, 10 payline that’s not really in operation all that much these days which puts it at a bit of disadvantage over some of the higher spec games. That being said, you do get some handsome multipliers, wilds, scatters and cascading reels offering up even more chances to win.

A classic theme if ever there was one, the Crown Jewels are a symbol of money and power, and that’s hopefully what you will get from his slot. Graphically, the game is a little dated these days, although it still looks OK and the game runs pretty smoothly. The mobile devices tend to run this slot pretty flawlessly and the symbols of the different jewels look good, without ever having that wow factor.

The game is pretty much focused around its multiplier table and the number of times you can turnover your bets. These range, depending on how much you wager per spin, but the ratio will remain the same. Ideally you want to be loo0king at 5 of a kind as this is where your top earners come into play. 4 and 3 do respectively well between them, but only really when you get in the higher brackets. For example, the lowest rating jewel is the blue emerald and this pays 2x your winnings for 3, 5x for 4 but 50x for 5. 5 of these pays more than just three of the op ranked symbol!

The game includes a drop down style, which means that the jewels will disappear if they are winners to be replaced by new ones that can form new winning paylines. For each successful time the board does this, a multiplier will be added in the box at the top right. The winnings for that line will be multiplied by whatever number is in that box and will increase as more successful lines are made with just one spin. The maximum multiplier will be 10 times your winning line.

The wild symbol in the game is the Crown Jewels log and will replace all other symbols to make winning lines. It just so happens to be the biggest paying symbol with 5 making 500x your bet amount.