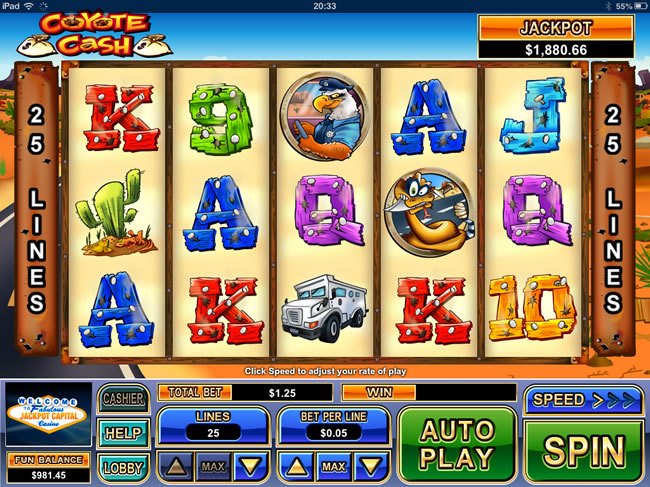 Wile E. Coyote was a creation of animation legend Chuck Jones in 1948. The entire varmint wanted to catch a road runner and over the course of 48 cartoon shorts, despite an apparently open account with Acme supply company, he was never able to catch his quarry, belying his clever name. In Real Time Gaming’s conceptualisation of Mark Twain’s description of the coyote as “a living, breathing allegory of Want,” the cartoon desert scavenger has become a gun-toting desperado and has forsaken a mere meal and set his sights on an armoured truck stuffed with cash.

Coyote Cash is a five-reel mobile slots game that conceals wins along 25 pay lines. You can get the action spinning for just 0.01 coins and there are 15 levels of wagers up to as many as 5.00 coins per payline so as much as £125.00 per spin can be risked. There is an Auto Play feature to keep the game of chase and elude moving along. A progressive jackpot can be won at the conclusion of any game. It is triggered at random and wins are added to any previous successes.

The attempted heist takes place in the desert of the American southwest. To set the mood there are steer skulls, cacti and rattlesnakes lurking in the barren landscape. Coyote has a bandanna so he will not be identified after the caper. He is also packing heat, hopefully from Smith and Wesson and not the Acme manufacturing company. His target is an armoured truck that is protected by one mean and buff chicken hawk. This will not be easy.

The Coyote is the Wild and the Scatter is the Loot. The Coyote will substitute for all of the other symbols in the game except for the Loot. If he happens to contribute to a winning combination that prize will be doubled. If five Coyotes fill a payline it will return the top prize in the desert – 10,000X your wager. That top prize is matched if you create a win line with all Chicken Hawks and Coyotes as well.

The Loot can be rewarding as well. Just two of them start filling your bank and five will multiply your bet by 200X on a payline. If three or more are uncovered anywhere on the reels you enter a bonus round with 20 Free Spins. Multipliers in the free play will be either 2X, 3X or 4X, depending on how many Loots there were to trigger the bonus. No wonder Coyote is after those sacks.