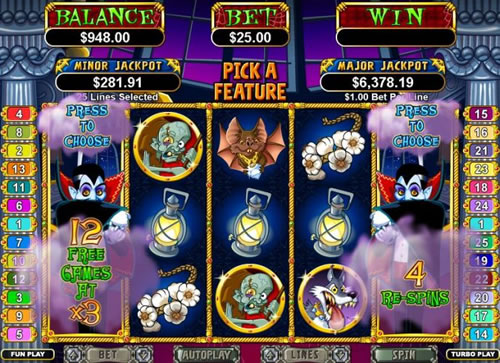 Just when you thought it was safe to pull your mobile device out of your pocket Real Time Gaming comes along with Count Spectacular to scare the living bejesus out of you.

Count Spectacular is a five-reel mobile slots game that can score winning plays along 25 pay lines. You can stir up the spookiness for just 0.01 coins and wager as many as 5.00 coins per payline so as much as £125.00 can be riding on any one spin in your hand. In between are thirteen levels of play to suit any level of punter. There is an Auto Play feature to keep the reels spinning.

Real Time Gaming is not satisfied with just the Count Dracula legend to mortify players. It also throws in every nightmare inducing character from Grimm’s Fairy Tales – the big bad wolf, the wicked witch and Cinderella’s carriage. There is also a collection from granny’s night stand that is probably the scariest of all – a hand held glass reflector, an old lantern and ancient jewellery. It all plays out under a full moon in a castle on a hill that hasn’t been cleaned of spider webs in centuries. Bats are flying around and host Count Spectacular is ready for the arrival of his winsome blonde guest.

Count Spectacular is the Wild in his own game and he will substitute for all symbols but his Castle, which is the Scatter. When the Count appears he expands to turn the entire reel wild. Any winning combinations this brings about will pay at the level of your initial wager. Five Count Spectaculars on an active payline will score 10,000X your bet, the highest jackpot inside the game.

The Castle Scatter serves as a multiplier, not a gateway to free spins. It can deliver up to 200X your stake. Free spins are in play in the haunted castle, however. Nor surprisingly Count Spectacular is involved. When he does his expanding self-thing on Reel 1 and Reel 5 you are given a choice of 12 free spins or four re-spins with those two expanding wilds in place. The free spins option can re-trigger.

Two progressive jackpots, a minor one and a major one, can be won at the conclusion of any game. They are triggered at random and wins are added to any prior prizes. Now that was not that scary was it?