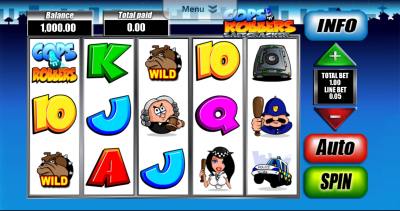 Cops and robbers has been one of Mazooma’s top slots for a number of years now. The transition through to their mobile section has been pretty seamless and it provides this light hearted and engaging game to be enjoyed on just about all mobile platforms. If ever there was a classic mobile slot, this is most defiantly it!

The game includes the old school three reel and one payline format, but what we loved about it was that it includes a hold button on each reel, just like your pub fruit machines do. The games include a ton of multipliers for certain pay-outs and even a really catchy bonus round.

It’s the old classic where the robber, dressed in the black and white stripped jumper, face mask and glasses, is trying to get away from the slightly overweight police man. It’s your job as the robber to not get nicked whilst trying to win a few bob along the way.

It’s a simple setup in the game, always has been, but it’s pretty brilliant at the same time. It might not appeal to everyone and the lack of paylines will be at the heart of this. But if it’s classic, light hearted fun you are after, then this theme can’t disappoint.

The first thing to remember is that so many of the symbols have a multiplier attached to them. Look carefully as they are usually the ones with three of a kind in, but can range from 1x all the way up to 500x form the mug shot of the robber.

The game is pretty much solely based around its feature game, of which we must add is so much fun. Although, when isn’t making money?

The game is laid out in sort of a snakes and ladder feature where you have to roll the dice to get around the board and away from the chasing police officer. The squares on the board range between multipliers, bonuses, different win amounts and extra lives. Your aim is essentially to get right to the end of the board without being caught. Successfully doing so will get you a 200 times multiplier on your last winning line plus and additional extras won throughout the game.