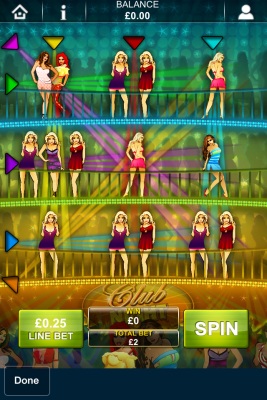 The Club Night mobile slot is a theme that we haven’t really come across before, and that’s for a pretty good reason. It’s basically made up of ladies in short dresses and skimpy clothes dancing around your smartphone screen. Whilst this concept will appeal to some – males – , the majority will likely be looking somewhere else for their mobile slots fix.

Club Night takes on the role of one of PlayTech’s simpler formats in its 3 reel, 8 payline structure. Now there’s nothing wrong with this, and we know there’s market out there for this sort of thing, but its low volatility means that it doesn’t exactly capture the hearts and imaginations of those that dream big when playing mobile slots.

The theme is based around going out to a club with your friends and having a good time; or at least, that’s what we thought it was going to be. It is actually based around a series of moderately clothed women looking all seductive like. The symbols are really hard to make out the difference between as well, with some including two or three ladies at once, all identical in features apart from a slightly different colour dress. Anyway, what you are essentially trying to do is work your way onto the dance floor where you will be greeted with a feature payout to give your bankroll a much needed boost after all that dancing!

Feature rich, this slot is not. In fact there are only two ways to win extensive prizes. The first is by utilising the scatter symbols which come in the form of three none-blondes that jiggle their parts at you when they have landed; classy! The second is the jackpot round which is much more lucrative and could potentially result in you hitting up 1000x your original bet. With maximum bets reaching 8 coins a spin, this means that the maximum jackpot you can win is 8,000 coins, which is on the low side in all honesty.

It’s been an interesting time playing with Club Night and one that’s left us feeling a little bit confused. In one sense, the low volatility of it all does its job and allows you play for little and often without ever really being in danger of crushing your bankroll. On the other hand the theme is just baffling and a little degrading to be honest. It’s one that will have a very niche target and likely one that will include very few female players.