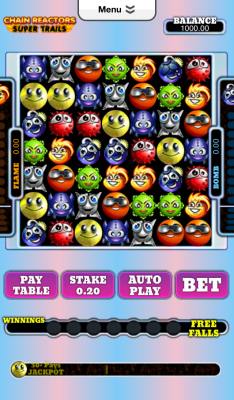 Chain Reactors is actually a new style of casino game that follows one of the most intriguing mobile games in terms of gameplay that we have come across. Chain Reactors includes a bunch or really cute characters that tend to remind us of those little furby toys from back in the day.

It’s not like you standard slot in that it includes paylines and reels, but it includes a 7×7 grid filled with these little characters. The game comes with two bonus games as well as a free play option.

We want to go into a little more detail about how this game works more than anything. Each spin will remove all the symbols in the grid and replace them with a new set. But, for each winning combination, these faces will disappear and new ones will drop in. It’s a little bit like Tetris in this fashion. One spin can technically bring you multiple wins as paylines are removed and new symbols replace them.

In terms of aesthetics, the game looks and runs brilliantly, even on the smaller mobile screens. The 7×7 grid did concern us at first, but it reduces in size really well and we found no real issues. The characters on there are so full of life and are really well designed, making this a fun game to play.

There are two bonus features to choose from in this game which are called the Bomb and Flame. To get into each section you must first pick up four or more of each symbol on a winning payout. Once this happens you will fill up the jackpot bar on the left hand side of the screen with one bar. You need to get 10 of these bars (10 paylines of 4 or more symbols) to get into each bonus round.

Once you get into the bomb feature, you will then be greeted with a number of the characters from the game all playing pass the parcel. But instead of a parcel, they have a bomb. As the bomb continues to be passed it will grow increasingly nearer to exploding and once it does, it will award you a prize.

The Flame feature includes a giant dragon that will burn a number of characters from the game. Each character will be worth a monetary sum and from there you will be able to claim this prize once the dragon has left.