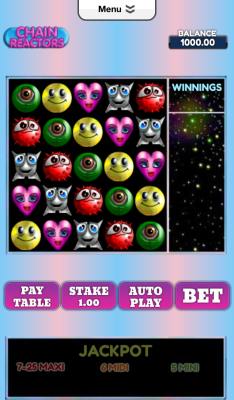 Chain Reactors is the original in this sequel of casino games and has become one of the most popular mobile slots franchises in the world. The origins of the game come from basically including a number of really cute looking animals along with some pretty random looking to boot.

It’s a game that doesn’t include your standard payline, but instead a 5×5 grid.  The grid has a number of different icons involved that are actually disposable, so when a winning line is made, they disappear and new icons get dropped in.

The game is actually one of the most unique we have come across and whilst all the principles of a slot machine are in place, it plays out very different. Graphically, the game is about as good as your going to get and we found user engagement throughout the game to be excellent as a result.

We would question longevity with a game like this as when you look at the facts; it’s not got an awful lot going over a sustained period of time. Having said that, when coming in to review the product we found ourselves just immersed in this world of seemingly randomness and just all round good fun.

We have to admit, the features side to the game probably leaves a lot to be desired, because as far as clicking spin to win, there is little else going on. But, for some reason it never really seems dull and where a lack of features is in other mobile slots killed them before they started, things just has something that draws you in.

The first thing you need to notice is the pay-outs for each of the characters. It’s possible that you can get up to 16+ of these characters covering your board and if you do, then you will be in for a very decent payday indeed. THE symbol to target is Zoid, of which if you get 16+ off will receive a multiplier of 100,000x your winnings. Working down from there multipliers of 6,000, 600, 100 and 50 are all on offer. Bear in mind that the max bet is 1,000 coins a spin as well!