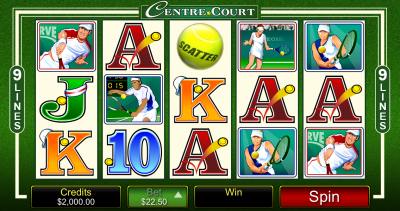 In an industry filled full of clichés when it comes to the theme of mobile slots, it’s always interesting to see how the sport genre fairs. In this case, Centre Court by Microgaming was actually one of the first of their kind. They still, to this day, bring in one of the most competitive slots, in terms of features though, rather than design.

What Microgaming offers you is a 5 reel, 9 payline game, which in the current market, is pretty dated to say the least. Having said that, the game offers up a huge jackpot of 450,000 coins along with a free spins round and expanding wilds, of which we will discuss later in this review.

It’s not hard to get away from this being a tennis theme, as that is pretty much the top and bottom of it.  Having said that, considering this was actually one of the opening sports slots from Microgaming, the design is still pretty neat! We loved the animations on winning lines, especially from the tennis balls and the trophy’s, but not only that, the numbers and letters used as symbols didn’t feel that tiring. Considering its age, it actually still competes pretty well in what’s become a tough industry to crack.

The first thing we want to point out is that this game does include a gamble feature, which has become synonymous with Microgaming slots. We mention this because it’s something that has been added to the game over the years because of how successful it has become. It’s pretty simple to use and it allows you to gamble any winning pays to either double or quadruple these winnings. Basically, you pick the colour of the card for double and the suit for quadruple. Interestingly, you can do this as many times as you wish until you lose or the payout limit has been reached.

The free spins round is accessible via picking up three or more of the tennis ball scatter symbols. Once in, you will get 18 free spins with a 5x multiplier on your winnings. During the game you may be awarded a 2x, 3x, 4x or even 5x additional bonus for just a single spin. Free spins can be re-triggered for this section.

The wild symbol is your most lucrative in terms of value paying out 1,000 coins for picking up five of the wild trophies. These sub in for all symbols within regular play, but also become stacked when in the free spins round.