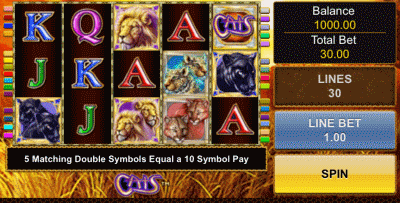 For these cats, think zoo, not pet shop. The Cats mobile slots game by IGT features the cats David Attenborough whispers about from behind the safety of a manketti tree.

Cats is a five-reel slots game that pays on 30 win lines. There are no progressive jackpots but a wide range of betting options holds out the promise of a jackpot of 25 million coins for the highest rollers.

There are really two themes at play here. One is homage to a hard-gambling slot machine that can be seen in the wild in just about every casino in Nevada and elsewhere. Cats are finicky animals, even on slot machines. There is a Golden Lion slot machine in the MGM Grand in Las Vegas that hasn’t paid a jackpot in almost 20 years. Management wants to euthanise the machine but is not allowed while it still protects a $2.3 progressive jackpot. That is the slot machine legacy IGT honours with its Cats app.

The other is to honour the big cats – the lions and leopards and panthers that we are lucky enough to still have at the top of the food chain. The cats of the African savannahs are beautifully drawn but the soundtrack seems more fitting for the slot machines of those dark casinos than the sunny safari onscreen.

First of all, you are not accumulating reels but symbols in forming winning combinations. So you can build a payline of three or four symbols with just matching big cat pairs on the first two reels. But the cats also sometimes leave two footprints side by side as they stalk the savannah. The Wild is the Paw Print and when it helps forge a win it always substitutes as a double symbol.

When five or six paw prints are discovered on the three reels in the centre reel a Free Spins bonus gets underway. Five spins for five paws, ten for six. These Free Spins sessions are like carrion to big cats – they stream in to the reels to deliver bigger wins as the freebies count down. The only difference between this mobile game and its Vegas ancestors is nobody will be able to see you scooping buckets of quarters out of the tray when it happens.