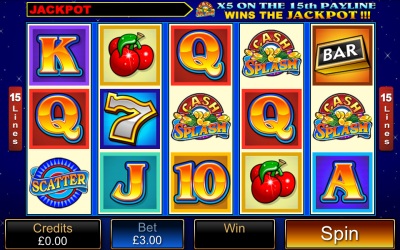 The cash splash mobile slot brings you into the world of big money jackpots. In all fairness, this slot doesn’t have an awful lot going for it. It’s one of those that’s pretty middle of the road, you know, something that you just want to kind of say ‘Meh’ too.

But, flip side of this means that there’s nothing glaringly wrong it. It just lacks a bit of depth but it does include the 5 reel 15 payline game that Microgaming have been so productive at promoting to their mobile slots games. Feature wise though, the game feels a little empty and the lack of free spins, multipliers and bonus rounds really makes you wonder why many would use this slot.

The slots actually quite well designed and pretty easy on the eye to be hones! It looks great on the mobile device as well, but in terms of a them it’s hard to put your finger on which road it’s trying to take. It kind of looks like a modern attempt at the older fruit machine games with the lucky 7’s, cherries, bars and 10-A symbols.  Apart from that, we can’t really see where else they are trying to head with it.

It would be easy to think that this section will be left blank after the build-up we have given it. But there are a couple of saving graces for Cash Splash. The first is that this slot is a progressive meaning it’s actually one of the bigger paying games in the Microgaming range. Granted getting the 5 wild symbols on the 15th payline all in a row will be tough to say the least, but you just never know.

There are also scatter symbols which, if used, will multiply your winning payline by the amount you have bet. Now this is great, but if you bear in mind that the games stakes range from 0.25 coins up to 250 coins, then this once again could potentially be a massive payday.

Cash Splash is definitely one of the lesser overwhelming slots that Microgaming have produced and we can see why people are quick to jump ship with this game. But the potential of one of the biggest paydays on the network via their progressive jackpot obviously provides a huge pull and one that shouldn’t be overlooked due to lack of bonus rounds and free spins.