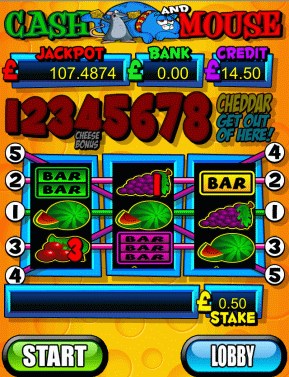 Ah, the eternal dance between house cat and mouse. Tom Cat and Jerry Mouse were first animated for a Hollywood short film in 1940 by William Hanna and Joseph Barbera. The movie spawned a successful cartoon series in the 1960s and when Tom and Jerry appeared on the BBC for a three-decade run beginning in 1967 it was a homecoming of sorts for the duelling cat and mouse. “Tom and Jerry” was a commonplace phrase tossed around by English youth as far back as the 1820s when engaged in boisterous behaviour. Cash – he’s the cat – and Mouse, who plays the part of the mouse in the game in Alchemy Bet’s mobile slots game, is based on their hilarious hijinks.

Cash and Mouse is a three-reel spinner with payouts along five winlines. There is a progressive jackpot and the bait in this quick-stepping game is its hilarious bonus round. Stake levels start at 0.25 and can you can spin for as much as 5.00 units per payline.

Mouse is cheeky triangular fellow and Cash is truly a fat cat who doesn’t look like he can bothered if Mouse makes off with all the cheese wheels he can carry. But don’t let his apparent sloth fool you – Cash can turn seriously peeved in an instant. The Simpson took the cat-and-mouse chase to its gory conclusion in its Tom and Jerry homage, Itchy and Scratchy. The animosity between Cash and Mouse scarcely rises to that level but still Mouse must remain diligent on his hunts for cheese.

Cash and Mouse is a standard fruity of classic connotations as you steadily work you way up the nine-level trail by collecting numbers that appear on the reels. The pas-de deux between feline and rodent remains off-screen until Level 4 is reached whereupon you are transported to an animated cheese board where Mouse and a lump of cheese are frantically trying to stay ahead of Cash on the trail up the board. There are cash awards aplenty in the Cheese Galore Bonus but it all ends if Cash successfully pounces.

If in the course of play you can manage to stay focused amidst the antics going around all about you and line up three Jackpot icons on the winline you win the progressive jackpot. Cheddar get out of here!