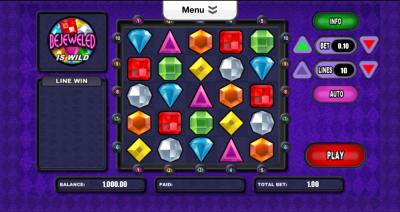 Bejeweled burst onto the scene with its mobile game back in the early 2000’s. Since then the franchise has gone from strength to strength, and it’s probably not come as much of a surprise to hear that the game has been converted into a mobile slot. The slot brings in a colourful backdrop, but if anything it does feel a little dated when compared to some of the video slots in the current market.

You get a pretty simple 5 reel by 5 grid with a relatively poor 10 paylines to be honest. That being said, it does cater for a wide variety of bankrolls with a max bet ranging right up 200 coins per spin. The lack of bonus rounds and free spins are somewhat of a let-down, but the inclusion of a healthy jackpot worth 4,000,000 coins more than makes up for it.

It’s a colourful, yet classic looking slot that comes on offer from Bejeweled. The game has a Tetris feel to it and instead of the icons spinning they seem to drop in, more than anything. The soundtrack for the slot is very retro in all honesty, and after just a few minutes playing its likely you will be reaching for the mute button. The symbols include jewels, believe it or not, and to be honest they actually look really eye catching!

In all fairness, the game does lack in the features department, but we will report what is on offer. First up you get your wild symbols, which is pretty standard in that it will substitute all existing icons to create winnings lines. The symbol you need to be looking out is the Bejeweled logo for this.

But, there is a slight twist with the wild in this game, as unlike most games, it’s actually your most lucrative icon. The icon is the trigger for your potential jackpot winnings and to get this you will need to collect 5 of these on the 10th payline for a shout of the jackpot.

We mentioned earlier that the jackpot is 4,000,000 but you do need to playing on max bet and max number of paylines to be able to win this. With the max bet standing at 200 coins a spin, it comes at quite a price. However, even if you aren’t plying on mx bet, the jackpot actually is just 20,000 coins, times your line bet amount. So even if you playing for just a fraction of this amount per spin, you will still be in for a tidy win fall.