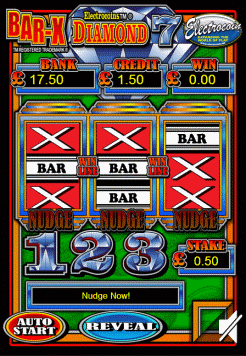 Bar-X became the most recognisable fruit machine in Britain when it was introduced in 1981. Since its popularity derived on fast and understandable play the developers were careful not to lard future extensions with bells and whistles that could sabotage that appeal. Alchemy Bet read the same playbook when it followed up the success of the transfer of Bar-X 7 to the mobile platform as the first Electrocoins machine designed for smartphones and tablets. Bar-X Diamond 7 just inserts a luxury diamond to the basic play in place of the Red Seven.

Bar-X Diamond 7 if a classic three-reel slot with just a single payline. There is no progressive jackpot but mega in-game cash bonuses to be plucked from this diamond mine.

Bar-X slot games are classic one-armed bandit. Here the crystalline Blue Diamond sevens light up the reels against a crisp black, green and red theme. The sound effects are those that have defined fruit machines for a generation of slots players.

There are no wilds, no free spins, nothing to break the fast-paced wins and losses that fall on the reels in Bar-X Diamond 7. Random nudges are awarded that permit the pulling down of icons onto the payline to form a winning combination. There is also a Reveal button that can be tapped to see what beneficial symbols might be lurking out of sight above the reels.

Players may also be rewarded with a chance to hold an entire reel in play for the next spin. The Blue Seven is the big scorer in the game and when three queue up on the payline the mega-coin jackpot is triggered.