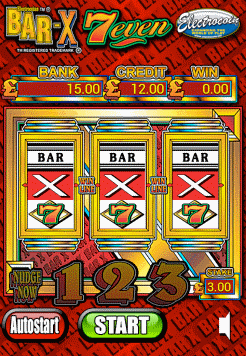 Bar-X brand fruit machines first sprouted in UK bingo halls and arcades in the early 1980s and have been in constant production ever since. More than 100,000 machines have been constructed in that time as Britain’s most popular Amusement With Prizes game has spread to Australia, Brazil and the States – anywhere that slot lovers breed. There have been scores of Bar-X extensions over the decades, including Bar-X7 that Alchemy Bet has brought to mobile.

Bar-X 7 is a classic three-reel, single payline slots. In its beginning Bar-X founder and game builder John Stergides thought even the traditional one-armed bandits had become too complicated for most players to enjoy. He drew out a bar, an X and a Zero on paper and that became the basis of his gaming empire. Bar-X 7 is another variation on the “OXO” machines with only the Red Seven, a Bar and an X in the symbol line-up..

Bar-X 7 begins with the original Bar-X sounds of “buuda bun buump” injected with the occasional explosion and rapid-fire signals for wins that slot parlour regulars will not doubt fondly recall. This is the first of the Bar-X games released on mobile to feature the famous sound. The game play is exactly like the original fruit machine but the spins play out against a fiery red Bar-X background.

The favourite of slots players in Bar-X 7 is its random chances for nudges and holds that give boost unexpected wins. There is even a sneaky Nudge Preview feature that allows you to peek in on the symbols hidden in the rows above. You can set the game for automatic nudges as well as automatic spins.

The red 7s are your best friend here as the game name might imply. Three on the payline brings back the mega cash win bonus. There is also a Hold feature that enables to hold a particularly rich reel in place for the next spin. Play is fast, play is simple and big jackpots await All you need to remember is in the name: Bar-X 7.