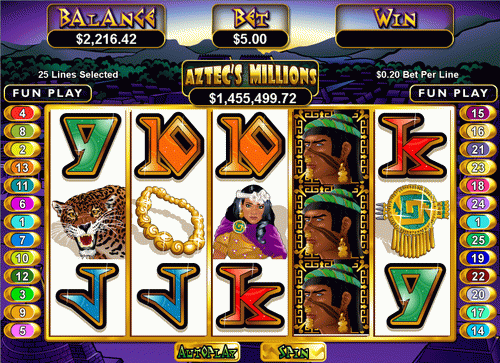 The Aztec civilisation, according to legend, rose in central Mexico in the 14th century after the migrating Mexicans people were presented with a vision of an eagle perched on a prickly pear cactus, devouring a snake. That image continues to this day on the the Mexico coat-of-arms. For the next two centuries the Aztecs consolidated power with sophisticated warring and accumulated riches along the way – two traits that have captured the imaginations of gaming software developers. Aztec’s Millions is Real Time Gaming’s version of the gold-loving ancient peoples.

Aztec’s Millions is a five-reel mobile slots game that pays out along 25 lines. You can engage the hunt for Aztec treasure in the game with a somewhat healthy minimum play of 0.20 coins and can bet as high as 5.00 coins per payline so as much as £125.00 per spin can be risked. You are chasing millions, right? There is a Turbo Play option to reach that treasure faster. Those millions arrive in the form of a linked-play progressive jackpot that always resets to a minimum of one million units.

The action takes places in the mountainous country of central Mexico, bathed in a mysterious purple light. If you squint just right you should be able to make out an Aztec stepped pyramid in the scene. Spinning on the reels are an Aztec chief and his queen, a jaguar which was the symbol of Aztec warriors, an assortment of idols and much old Mexican bling. The graphics are bight and clean on a white background and the minor playing card symbols have been given an iridescent gem-like quality.

The Aztec Idol is the Scatter in this treasure hunt and he holds the key to Free Spins. The bonus starts off reasonably with five awarded for three idols. That increases to 15 for four and if five idols invade the reels the free spins reward goes all the way up to 25. The free spins can be re-triggered, apparently up to no known limit. And all the while prizes are tripled in the bonus round. Even if you don’t corral enough idols to trigger this bonus even one or two will secure a multiplier from the pay table. No wonder the Aztecs idolized this little guy.

The Aztec Chief is the Wild and he can substitute for any of the other symbols except the Scatter Idol to manufacture winning pay lines while you plunder his native land. He only appears on Reels 2, 3 and 4. The big time jackpot will be surrendered when the Aztec’s Millions Logo appears five times across an active payline. Hitting enough of those would certainly exhaust the coffers of the Aztec peoples – no wonder the civilisation lasted only a few hundred years.