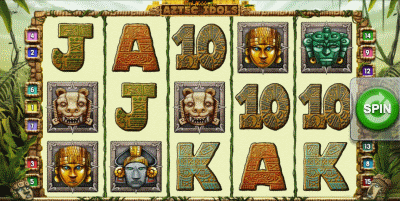 In the Age of Exploration Sweden and Queen Christina didn’t make it much past the area around modern-day Philadelphia in the New World. But with their new game Rich Wilde and the Aztec Idols the Swedish developers Play’n Go display an adroit knowledge of native Central American culture – or they just paid close attention during Steven Spielberg and Harrison Ford movies.

Rich Wilde and the Aztec Idols is a five-reel slot that pays on 15 lines. Denominations for wager range from 0.01 to 0.25 coins and you can bet between one and five coins per line. There is no progressive jackpot but you can expect things to get really Wild in those jungles.

Our kerchiefed hero playing the part of Indiana Jones in the jungles of Central America is Rich Wilde, who mixes it up with an assortment of Aztec Idols in his adventures. Rich is animated when he delivers a win from the reels but the Idols give out little more than a glowing eye every now and then. They are a curious lot, these Swedish-imagined Aztec Idols – one looks like Admiral Horatio Hornblower and another appears to be an aquamarine Robocop. The minor playing card symbols are nicely carved from an Aztec Calendar Stone, which will be your greatest quest when play begins in earnest.

Indiana, er, Rich Wilde is the game’s Wild and he will assume control over every symbol except the Bonus. If the Wilde Wild punches a ticket on all five reels the bonus is 5000 coins.

Three golden Aztec Pyramids on Reels 3, 4 and 5 trigger the Bonus Game that takes place in a sun-splotched room deep in the temple where you select among Idols, false and otherwise, and win up to 150X your total bet. The game ends when you pick the Idol containing poisonous gas and it is time to hasten your leave from the pyramid.

The circular Aztec Calendar Stone rotates only on Reels 1, 3 and 5 but when at least one shows up on each of those reels the Free Spin Bonus is activated. The Stone bursts off the reels and begins spinning to identify your number of free games. All winnings will be paid 5X and an extra Calendar Stone Scatter becomes active. The Free Spins Bonus can not be re-triggered during extra play.

You can engage the Gamble feature after your most recent win to double or even quadruple your bank. But after all that hunting in the jungle it would be a shame to hack your way back out with nothing.