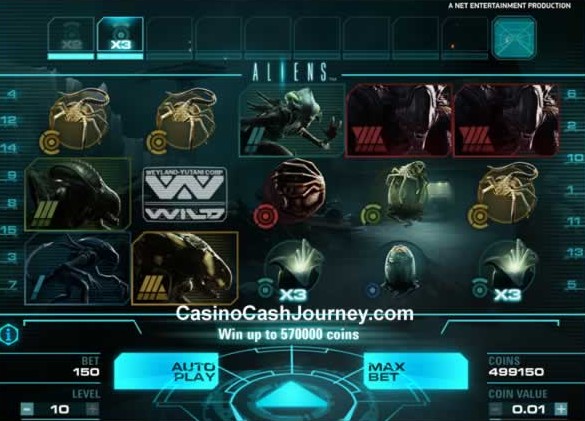 Aliens is one of the rare Hollywood blockbuster sequels to exceed the standards set by its predecessor. Director James Cameron pivoted from the horror motif of the original and transformed the story of Sigourney Weaver and her Colonial Marine forces into a violent action adventure that knotted stomachs more than elicited blood-curdling screams. Nearly three decades later Aliens has stood the test of time and is generally regarded as on the best science fiction films of all time. And it was filmed in Britain. So buckle up because Net Entertainment returns you to planet LV-426 with this mobile slots game.

Aliens is a five-reel mobile slots game with 15 pay lines. You can start hunting Alien life forms for just 0.01 coins and wager as many as 1.00 coin per payline so as much as £15.00 can be wagered on the battle. There is an Auto Play option and a Bet Max option. There is way too dangerous a mission to worry about building any progressive jackpots.

Ellen Ripley as inhabited by Sigourney Weaver is returning to LV-426 to do battle with Alien eggs that have destroyed the colony on the planet. To accomplish this she must penetrate the hive and dispose of the queen. Ripley’s employer is Weyland-Yutani corporation that runs the human colonies outside the solar system. It is known simply as “The Company.” As a player you will be representing the company in its quest to exterminate the Alien menace. So on the reels you will get plenty of the gruesome life forms in their various guises and in the background are bloody corpses of your comrades. Your mission is to make it to the hive and destroy the queen before you too are terminated. A tense and suspenseful soundtrack accompanies you on your journey.

The only special symbol to keep an eye out for is the Weyland-Yutani Logo that is the Wild as you would expect from a company that consistently exhibits the worst aspects of corporate profiteering, willing to sacrifice decency and human life in seemingly the pursuit of profit.

You must navigate three levels to reach the hive. You advance by filling the Multiplier Meter with symbols from winning combinations in The Search. Once you have enough team members your are off to The Encounter where you begin non-stop shooting of Alines. There is so much firepower on display your biggest problem is staying locked and loaded. Luckily you can collect ammo from the dead marines that litter the floor. If you run out of ammo before the multiplier is filled your progress to the hive is ended and you return to The Search.

To destroy the hive you must hurl grenades during five spins. Their effectiveness will determine your award in this meshing of mobile slot and arcade game. This time it is war!