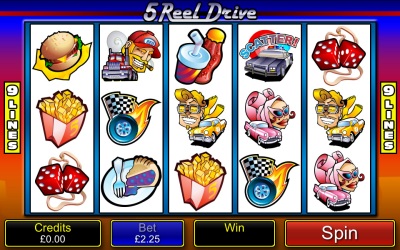 For us the 5 Reel Drive mobile slot is a real trip down memory lane as it was actually one of Microgaming’s first ever online slots. Since those days, this Americano themed slot hasn’t changed all that much, but they made it so good the first time out that only minor tweaks were needed.

The game actually only includes a 5 reel, 9 payline slot which is actually a watered down version of their original game. Why this was done, we aren’t sure. The game also doesn’t include a while lot of features in all honesty with just a handful of wilds and scatter symbols to keep you entertained. Back in the day, this was more than enough and a real trailblazer within the industry.

Think route 66. Think cheeseburgers. Think doughnuts. Think policemen. Think French fries. Think all things that are good about America and yet so bad for you at the same time and you will get a good feel of 5 Reel Drive. It’s basically follows a trip across America chasing down everything good they have to offer, whilst also trying to avoid a few obstacles along the way, such as the police.

Not an awful lot going on in the features section to be brutally honest, but three are two things you should be looking out for. The first is your wild symbol which is the road sign and will substitute for all symbols except for that of your scatters. The scatters are the police cars which have scatter conveniently written above them. These will multiply your winnings on a relevant payline buy the number of coins you have staked. 3 scatters will get a 5 x multiplier, 4 a 10 x multiplier a 5 a 50x multiplier.

It’s easy to describe this as a simple slot that’s a look back at the old school, but in all honesty it just doesn’t seem to cut the mustard anymore. There are better equivalents out there and you can’t help but feel that this old timer has been neglected by Microgaming. That’s unfortunately just the how the industry goes as there’s little point in actually updating it when you can just design a completely new slot that will increase player’s curiosity into playing that. You can almost think of 5 Reel Drive as a classic car; it’s still kicking bout, but in all honesty gets very little use these days due to modernisation.